Chevy was one of the first companies to come up with a serial-production all-electric vehicle. The Bolt debuted back in 2016 and the last year has brought a new version, which shares the platform with the original, but comes in an SUV body style, rather than a hatchback. Despite that things are changing pretty fast in this segment, the Bolt still has a lot of great things to offer, even though its range and performance don’t look so impressive anymore. The 2023 Chevy Bolt will continue in the same way, without more important changes.

This means that you may count on a very affordable all-electric SUV, thanks to the recent price cuts, but that’s not the only great thing about this SUV. The max range still looks decent enough, while the SUV shape provides a lot of interior space. At this same time, the centre of gravity is low, thanks to the batteries, which have a highly positive effect on performance.

We expect that the 2023 Chevy Bolt will hit the market sometime in the last quarter of the year. 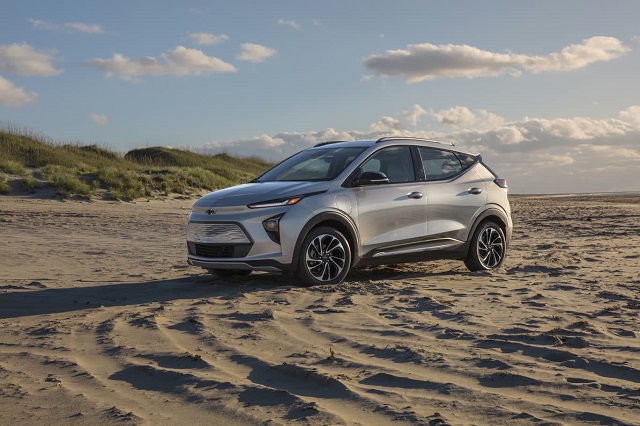 The 2023 Chevy Bolt will represent the second production year of the SUV version, so the amount of changes in pretty modest. Practically, there is just one notable novelty for the 2023 model year and that is the Redline Edition package. This version brings various visual updates, starting from glossy black, unique wheels with a red strip etc.

On the other hand, the overall layout remains the same. The overall look brings a typical SUV design approach, while the front face follows the company’s new design language (found on the new TrailBlazer, for example) and mixes it with a lot of styling elements that accentuate the model’s all-electric nature. This SUV isn’t too big, so it’s quite maneuverable. Also, the batteries provide a pretty low center of gravity, so the handling feels quite engaging.

More conservative buyers will be glad to see that this interior doesn’t follow the latest trends in the EV segment. Instead of offering futuristic shapes and minimalistic design, the Bolt’s cabin takes rather a classic design approach, with a design that’s more typical for a conventional car. All this comes mixed with a couple of screens and other modern tech features. What’s more important is that the build quality is very good. Most materials are soft to the touch, while color schemes are also very nice. 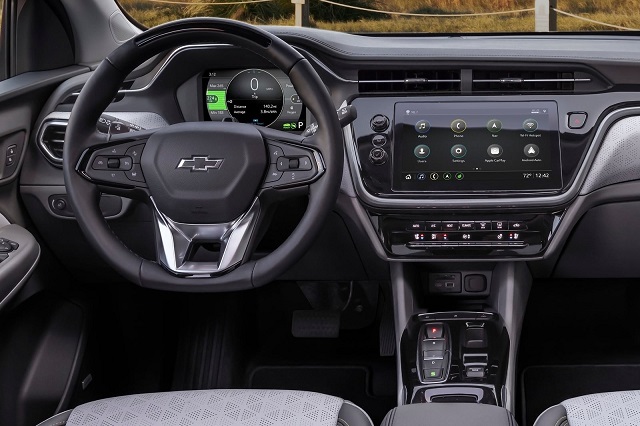 Thanks to the SUV shape, the amount of passenger space is good. Both rows can accommodate adults pretty easily, while the front seats are massive and supportive. The driving position is good and provides very good visibility in all directions.

The cargo area offers around 16.3 cubic feet of cargo space behind its rear seats and 56.9 cubic feet of the total cargo volume. These are pretty respectable numbers for the class.

We don’t believe that the next year could bring more important changes regarding the standard and available features. Most things should remain the same, so base models will probably come with a list of equipment that includes goodies like a 10.2-inch touch screen, an 8-inch digital gauge cluster, wireless Apple CarPlay and Android Auto, wireless device charging, and HD Radio. Automatic climate control, push-button start and remote keyless entry will also be part of the standard equipment. Base models should also come standard with safety features like a rearview camera, forward collision warning, pedestrian detection, automatic emergency braking, lane departure warning, lane keep assist, automatic high beams etc.

When it comes to available features, some of the highlights are a panoramic sunroof, navigation system, Bose stereo, and a Wi-Fi hot spot.

The 2023 Chevy Bolt comes in a single configuration, with a  single electric motor, mounted on the front axle. It features a max output of 200 horsepower and 266 pound-feet of torque, which is enough to provide pretty respectable performances. For example, this SUV needs just 6.5 seconds to hit 60 mph. The One Pedal Driving mode is also available, with a high level of regenerative braking.

The battery features 65 kWh in capacity, which is enough to provide a max range of over 250 miles. With a fast charger, you may count on 95 miles of range per 30 minutes of charging. 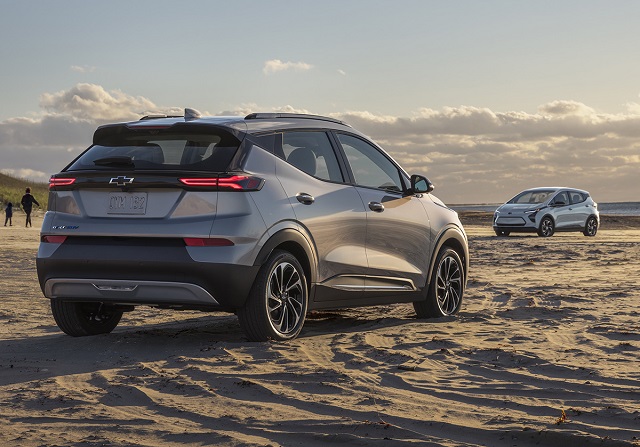 The 2023 Chevy Bolt will arrive sometime in the last quarter of the year. Thanks to the recent price cuttings, this is now a very affordable all-electric car, with a starting price of around 28.000 dollars.