The world’s best-selling SUV has been redesigned a couple of years ago but the Japanese manufacturer has brought a significant novelty for this year. It brings the 2021 Toyota RAV4 Prime, a plug-in hybrid version of the SUV, which significantly raises the bar in all aspects. The new PHEV RAV4 is both the fastest and most fuel-efficient version of this SUV ever made. It boasts loads of power from the new electric motors, while the battery capacity is so big that you may count on a pretty respectable all-electric range as well.

At the same time, the 2021 Toyota RAV4 Prime remains simple and practical. In terms of the overall design, it isn’t much different compared to the rest of the RAV4 lineup. It features pretty much the same design, while there are also two familiar trim levels in the offer. The new model has just arrived in showrooms across the United States and the company expects to sell around 5.000 units by the end of this year.

Of course, the most interesting aspect of the new 2021 Toyota RAV4 Prime is the drivetrain compartment. Although it is based on the same 2.5-liter four-cylinder engine as the Hybrid model, the new version comes with significant upgrades. First of all, the electrical part of the setup is significantly more powerful, so the max output goes all-away up to 302 horsepower. This is the most powerful RAV4 ever built, so you may presume that the acceleration is pretty amazing.

It definitely is, as the new version needs just 5.7 seconds to hit 60 mph. Things become even more amazing once you realize that the fuel economy and range are as amazing. You may count on quite impressive 94 mpg-e, while one of the model’s strongest points will also be a large 18.1-kWh battery pack. It ensures really respectable 42 miles on a single charge. Of course, the SUV is notably slower in the all-electric mode but still provides pretty decent 0-60 time in about 9.5 seconds.

Of course, another thing that definitely bothers you is charging. In this aspect, the new 2021 Toyota RAV4 Prime seems quite versatile, as you may count on three options. The first one is a 3.3-kW, 120V charger, which takes around 12 hours to charge the battery. Things are far better with the 3.3-kW 240V charger, which cuts the charging time to 4.5 hours. Finally, you can also get a Level 2, 6.6-kW charger, which recharges this battery in just 2.5 hours. The latter comes as a part of the Premium package, which is available in the XSE trim level.

The 2021 Toyota RAV4 Prime is fast and efficient. However, one of the potential drawbacks could be max towing capacity, which goes around 2.500 pounds. That’s about 1.000 pounds lower compared to the rest of the RAV4 lineup. 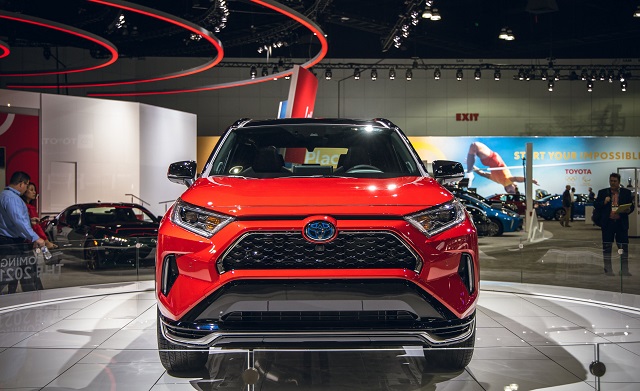 As you may presume, there aren’t too many changes compared to standard models. Visually, you can notice that this version looks a little bit bolder, thanks to a new bumper and a couple of other tweaks. Still, the overall design is the same and that includes dimensions as well. With 105.9 inches in wheelbase, this is a typical compact crossover but the thing you should consider is that the overall weight has been significantly increased due to the battery pack. So, fully-equipped XSE models can weigh over 4.300 pounds.

In terms of the chassis and suspension setup, you won’t find any particular difference. Some could find this as a drawback, considering the whole suspension setup remains largely the same, despite the significant power boost. Handling isn’t particularly amazing, but will certainly do the job for most drivers.

The same story goes for interior design. The 2021 Toyota RAV4 Prime features pretty much the same cabin design as the rest of the lineup. This refers to both look and dimensions, which means you may count on a pretty attractive dashboard, solid build quality and decent amounts of passenger and cargo space.

The 2021 Toyota RAV4 Prime is about in two trim levels. The base SE model already comes well-equipped, with goodies like an 8-inch touchscreen, Apple CarPlay and Android Auto. Also, you may count on a power liftgate, heated front seats and loads of advanced safety features, including adaptive cruise control, forward collision mitigation and lane keeping assist. 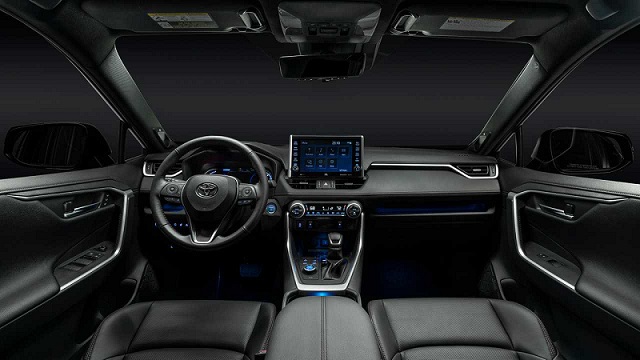 The upper-grade XSE trim level comes with numerous upgrades. Some of the highlights are things like a bigger 9-inch touchscreen, paddle shifters, sunroof, wireless charging, an auto-dimming mirror and many more.

The base price of 2021 Toyota RAV4 Prime goes around 39.000 dollars. It may sound high but keep in mind a $7.500 federal tax credit and other, applicable state credits, which can cut the price significantly.