The Tiguan has always been an amazing seller but these days, it is even more popular than the famous Golf hatchback. That’s why we are eagerly waiting to see a facelift later in the year. The current generation has been around since 2016, so this seems like a perfect time for a mid-cycle refresh. These kinds of updates have never been exciting when it comes to the Germain carmaker, so new styling details aren’t actually the thing we are so eagerly waiting. The actual reason why this update draws so much attention is that the company prepares a hi-performance version of it, the 2021 VW Tiguan R.

For the first time, we will see this crossover under the “R” badge and it looks like VW is about to offer a pretty serious performer. Interestingly, the new version won’t feature too many differences in terms of the styling. We expect big things under this relatively boring sheet metal and they don’t include just engine, but many other upgrades as well. 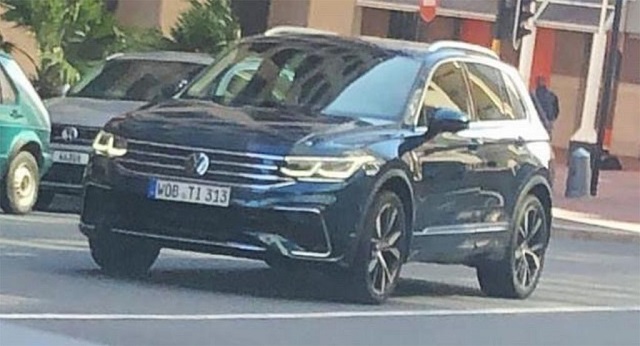 When it comes to the exterior design, the 2021 VW Tiguan R won’t bring any particular difference. The testing model has been around for some time and it looks pretty much the same as the R-Line package. Compared to standard models, this includes a lot of new details all around the vehicle and the only difference we’ve noticed on the test mule is a quad-exhaust setup on the rear end. Also, keep in mind that front air intakes are under the cover, so this may be another distinctive area.

On the other side, the overall look will adopt all the novelties that are about to come with the upcoming facelift. If you know this brand, you know you shouldn’t expect much. Updates will be mild, so mild that even the test model doesn’t wear any camouflage. Practically, the biggest change is a new front bumper, which comes with those long horizontal stripes, borrowed from the new Golf MK8. Also, the grille has been revised and those who look closer can also notice new headlights internals. Of course, we also count on new wheels and some new color options.

Besides aesthetical changes, we also count on various chassis upgrades. Of course, one of the first things that come to mind is a new suspension setup. The 2021 VW Tiguan R will sit lower and will be much stiffer, so we expect pretty impressive results when it comes to corners. Such suspension setup will also have a highly positive impact of the visual appearance, while upgraded brakes are another thing we expect to see in the new model. At this point, it is unknown if there are some chassis reinforcements or not. 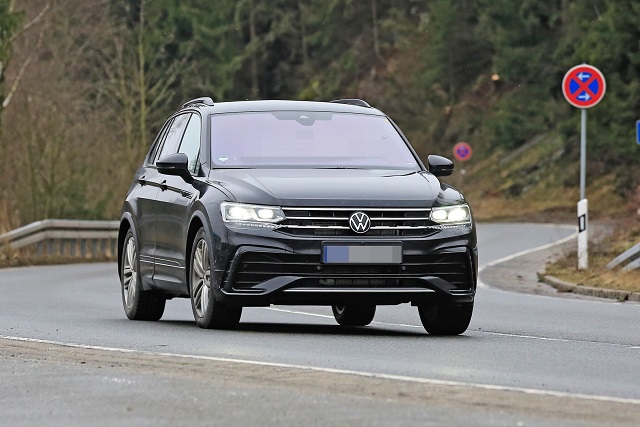 Like every other VW car, Tiguan features pretty impressive interior quality. Materials are nice, especially on the dashboard. Like every other VW car, Tiguan also features an extremely boring dashboard design, so we expect that the 2021 VW Tiguan R will come with lots of new details that will make this cabin less sterile. At this point, it is still unclear whether the upcoming update is about to bring any particular changes. In any case, we count on all those R-Line goodies, which definitely have a big impact on the overall styling. Of course, a couple of more additions are expected as well, including upgraded seats, instrument cluster and all other goodies that are typical for R-badged models. Is this going to include some exclusive pieces of standard equipment, it is hard to say at this point.

Of course, the most interesting part of 2021 VW Tiguan R will be its engine. Naturally, we don’t expect to see any experiments here, so the new crossover will definitely stick to proven solutions. This means you may count on a familiar 2.0-liter turbo-four, which delivers around 296 horsepower. Such numbers will definitely ensure amazing dynamics and overall performances, but various sources suggest we might see some power boost for this occasion and a max output that goes up to 330 horsepower.

Of course, we also count on VW’s well-known dual-clutch transmission, which may not be the most reliable unit on the market, but definitely is the quickest shifter among mainstream carmakers. 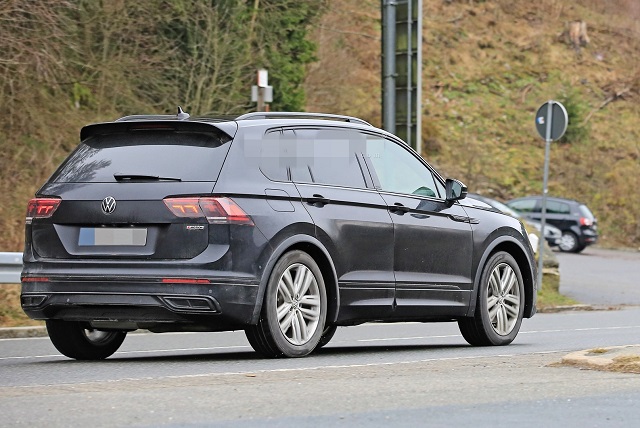 The testing model rides on track completely uncovered, which clearly indicates that the 2021 VW Tiguan R will hit the market soon. The exact details are still unknown, but we believe this will probably happen in the third quarter of the year. Currently, there is no such thing as a hot-crossover segment, like it’s the case with same-sized hatchbacks. However, one of the interesting models that’s on the way is a new RAV4 Plug-In Hybrid, which will also feature an impressive output of more than 300 horsepower. These two crossovers are already the biggest rivals, so the two particular versions would be very interesting to compare.