Audi’s largest crossover has been around for about six years and there is no doubt that the complete overhaul will happen in the next few years. However, the 2022 Audi Q7 certainly won’t come redesigned. The update from a few years ago clearly indicates that the current generation still has something to show. So, the best we could see for the next year would be things like new features and, eventually, new color options. Other than that, things are about to remain the same.

This means that you may count on a mid-size SUV that offers a well-balanced ride, along with one of the nicest cabins in the segment. Furthermore, we really like the long list of standard and available features, as well as a wide engine lineup. On the other side, keep in mind that this isn’t the most spacious model in the class and that the latest reports suggest below-average predicted reliability ratings.

The 2022 Audi Q7 should hit the market sometime late in the year.

In terms of base design characteristics, the 2022 Audi Q7 definitely won’t change. You may count on a familiar layout, based on a well-known MLB platform. The current generation has been around since 2015 and despite the facelift, the overall layout hasn’t changed significantly. Mechanically, things are still pretty much the same, with many parts shared with more luxurious and prestigious models like Cayenne, Urus and Bentayga.

Visually, the recent update has brought a plethora of updates. These changes were pretty intense and they made Q7 look fresh again. The most notable were those at the front, where you can now see a sharper and bolder appearance that, obviously, took a lot of inspiration from the younger sibling Q8. Also,  there are new tailgate and exhaust tips, while the two-tone color is now standard. It’s hard to believe that the 2022 Audi Q7 could bring anything more important in this aspect.

The last year’s update has also brought big changes on the inside, which is another clear indicator that the current generation is about to remain in production for some more time. The dashboard looks much fresher than before, utilizing more stylish contours, combined with a long list of tech goodies. We particularly like the build quality and precision, while materials are also really fine. All in all, it’s not hard to agree that this is one of the nicest cabins in the class and that there is no need for modifications in the future. 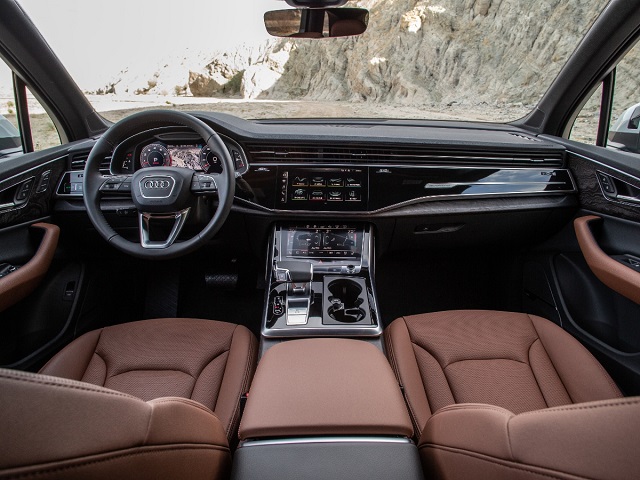 The amount of space and level of practicality are a little bit different story, definitely not that impressive. Although we are talking about a pretty big vehicle, the third row isn’t particularly spacious. Moreover, it is tight for the segment standards. On the other side, the first and second rows are more than sufficient with passenger room, so there is really nothing to complain about, except that front seats would use a little bit more side support.

When it comes to cargo space, you may count on about 14.2 cubic feet of space behind the third row, 35.7 cubic feet behind the second row, and a total of 69.6 cubic feet of the total cargo volume. That’s also below-average for the segment.

Still, if we are about to see novelties in this aspect, the additions will probably come from the current list of options, which also consists of some pretty interesting things. Some of the highlights are goodies like a 19-speaker surround-sound stereo, a 23-speaker Bang & Olufsen stereo, quad-zone climate control, wireless charging etc.

This aspect definitely won’t bring changes. So, the offer should start with a small 2.0-liter turbo-four, which puts out nearly 250 horsepower. That’s enough to move this large SUV confidently, though you shouldn’t expect some impressive dynamics. If you prefer something peppier, a 3.0-liter turbo V6 may be a better choice. This one puts out around 335 horsepower and offers notably better performances. However, it is also thirstier and less refined compared to inline-six counterparts from the BMW X5 and Mercedes-Benz GLE.

Of course, there is one hi-performance variant in the offer as well, under the well-known SQ7 badge. This model comes with the company’s well-known 4.0-liter twin-turbo V8, which is good for about 500 horsepower. With such an amount of power, this mid-size crossover needs less than 4.5 seconds to hit 60 mph.

Since no important updates are about to come, we presume that the 2022 Audi Q7 will hit the market sometime in the last quarter of the year. The price shouldn’t change too much either, so base models should go around 56.000 dollars.