2022 GMC Sierra Will Get New Interior and Styling Update

The current generation of GMC’s pickup has been around for a while and it’s time for updates. According to the latest reports, we will finally see so much-needed interior changes. As you probably know, the previous redesign went without any interior changes. We saw a familiar cabin layout and that seemed like a big disappointment. Fortunately, the 2022 GMC Sierra will make things right and we will see a completely new layout.

Other than the new interior, the next year’s model will also come with the updated styling, while one of the biggest novelties will also be the addition of the Super Cruise autonomous driving system. On the other side, the engine lineup will remain the same most likely, which would mean five familiar engine choices in the offer.

Considering the updates, we expect that the 2022 GMC Sierra will arrive a little bit earlier than usual, though still within the last quarter of the year.

There is no doubt that this is the most important novelty to come. AS we already mentioned, the current model still uses the dashboard design from the previous generation. Even though it doesn’t look that bad, the fact is that rivals look far more upscale from the inside, especially the current-generation RAM 1500.

We are about to see a new dashboard and from what we can hear, GMC won’t offer two layouts like in the case of Yukon. Instead, both standard models and Denali will use the same layout, though the latter will add several exclusive details. From what, we can see on the spy shots, one of the biggest highlights will be the new center stack, with a massive infotainment screen. Also, it clearly shows that the good-old column-mounted shifter will be replaced by a fancy-looking electronics gear selector on the center console. 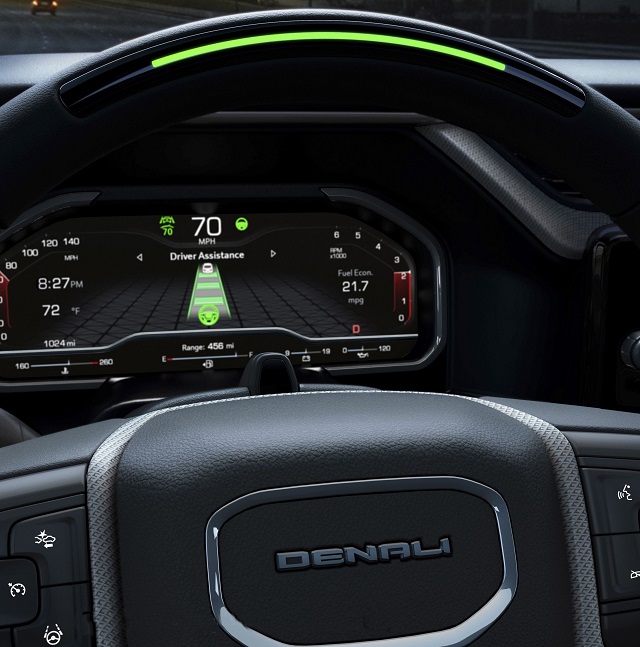 Besides the new cabin, this truck will also come with exterior updates. The test mule wears covers on both ends, which clearly indicates that we may expect to see new fascias. However, keep in mind that the current model already looks pretty good, so changes should rather be subtle. We presume we could see slightly revised bumpers, as well as smaller tweaks to the grille and headlights. Of course, we also expect to see typical mid-cycle updates, such as new wheels, new color options etc.

On the other side, the overall layout will remain the same. You may count on the same cab styles and bed lengths in the offer, as well as on the same mechanics. This model rides on GM’s contemporary T1 platform, which offers a good balance between capabilities and convenience.

When it comes to the powertrain, we definitely don’t expect to see changes. So, the offer should include five familiar engine options, starting from a good-old 4.3-liter V6, which puts out 285 horsepower and 305 pound-feet of torque.

Finally, there is a diesel version in the offer. It uses a 3.0-liter V6, which puts out around 277 horsepower and 460 pound-feet of torque.

Sierra Will Get Super Cruise

Another big novelty that is about to come is the addition of the Super Cruise autonomous driving system. This advanced system is capable of finishing pre-determined routes without any human intervention. It can take any kind of need action, such as steering, braking, keeping distance etc.

From what we know, this system will remain reserved for higher trim levels, probably only for Denali. On the other side, we have no doubt that GMC will keep base models focused on work, with a no-nonsense approach when it comes to standard equipment.

We expect to see the 2022 GMC Sierra a little bit earlier than usual, but still within the last quarter of the year. The current model starts at around 30.000 dollars and we don’t expect that the next year’s model will be more expensive. Key competitors are Ford F-150 and Ram 1500.