The all-new 2021 GMC Yukon has just arrived it first examples can already be found in showrooms. This full-size received a full redesign and the new generation comes with significant novelties in various aspects. The new model is lighter, bigger, more spacious and more capable. Of course, it comes with a completely new styling, new engine option and a full load of new features.

So, you’re probably wondering now what are the biggest improvements and why to pick this SUV over others. Well, the first thing we can say about the new generation is that it looks much better than before. Furthermore, it is far more practical, as it comes with significantly more space now, both for passengers and for cargo. All these things make the 2021 GMC Yukon more practical and functional before. Another thing we like is that this SUV comes in a wide range of variants, including a pretty luxurious Denali trim. 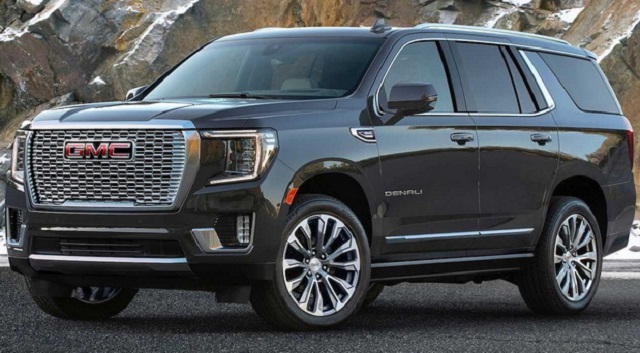 The new generation of the full-size SUV brings loads of novelties. Lovers of traditional body-on-frame SUV will like the fact that the Yukon has remained loyal to its original design philosophy. Still, that doesn’t mean that it is heavy and thirsty. It went on a diet, so the new generation comes with about 200-300 pounds less than before, depending on the version you pick.

Of course, big thanks goes to the new T1 platform, which underprints pretty much complete GM’s full-size lineup, whether it’s about trucks or SUVs. Once again, Yukon has most things in common with Tahoe. The new models came with significant improvements and while mechanics are pretty much the same, the visual aspect is what makes this SUV stand out.

Another thing we should mention is that the new generation finally gets an independent rear suspension, which significantly improves ride quality. At the same time, it provides more cargo space than before.

When it comes to the exterior design, the first thing you will notice is that the new model looks far more attractive than before. It completely adopts the brand’s latest design language. So, the front end takes a lot of inspiration from the new Sierra. The two faces look very similar, though the 2021 GMC Yukon comes with a couple of upgrades, especially in terms of headlights. On the side, the overall shape remains the same, Simply, we are talking about SUVs and it’s hard to imagine anything but a long wagon body. 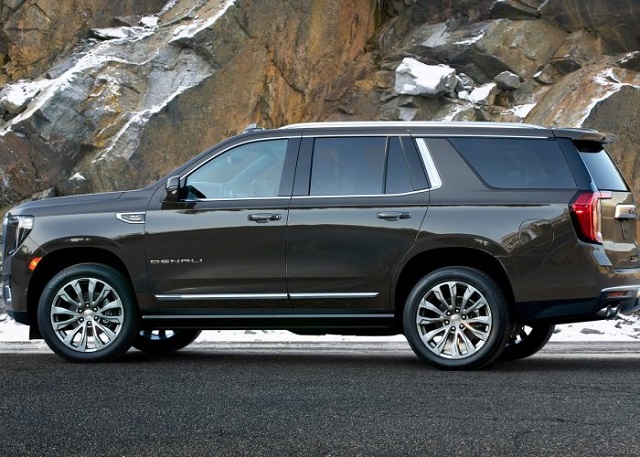 Speaking about lengths, the new model gets nearly five inches in wheelbase. Also, it is longer for about 6.1 inches. All these things have a highly positive effect on things like interior space and we will get on that in a second.

As we’ve just mentioned, the new 2021 GMC Yukon is bigger than before. Obviously, the biggest benefits are those in terms of interior space. That’s particularly important if we consider that the previous generation features a little bit tight third row and cargo area. Things are way better now. The third row offers more legroom, which the cargo area now offers 122.9 cubic feet of the overall cargo space. That’s a 28.2-cubic feet improvement compared to the previous generation. To explain to you how much this is, let’s just say that this is more than the previous-generation Yukon XL and the current Ford Expedition Max.

Besides plenty of space, the new 2021 GMC Yukon also offers a completely new cabin layout, highlighted by a new dashboard design, which features far better quality than before. More precisely, there are two dashboards in the offer now, as the hi-end Denali trim comes with an exclusive dashboard design, which is notably different and looks even more upscale. Of course, we should also mention that the new model comes with loads of new tech features and other standard equipment. 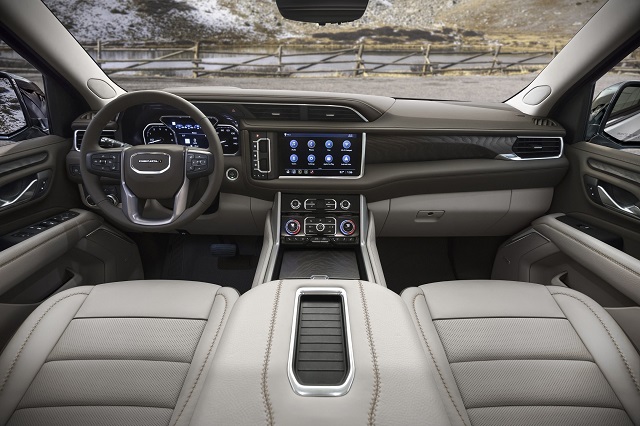 Under the hood, the 2021 GMC Yukon comes with one big novelty. That would be a diesel version, which will feature a familiar 3.0-liter V6 turbodiesel, the same one that can be found under the hood of Sierra. It puts out around 277 horsepower and 460 pound-feet of torque and seems like a great alternative for all those who are looking for something fuel-efficient.

On the other side, the two familiar units have carried on in the same way. The base model comes with a 5.3-liter that puts around 355 horsepower, while the optional 6.2-liter unit is good for about 420 horsepower and 460 pound-feet of torque.

All engines come in pair with a 10-speed automatic transmission.

The all-new 2021 GMC Yukon has just started arriving in showrooms. Base models go around 52.000 dollars, while the range-topping Denali model goes around 70.000 dollars. Of course, the competition is well-familiar and includes models like Ford Expedition, Nissan Armada, Toyota Sequoia etc.