While everyone is talking about the next-generaiton Mazda 6 and its new platform and inline-six engine, SUV enthusiasts bother with the company’s flagship crossover, which has been in the current for since 2016. That’s not a too long time but today’s industry demands thinking several years forward. So, it’s no wonder that we can already hear lots of rumors about the next generation. While some suggest that the complete overhaul could happen already in the next year, we are pretty sure that the Japanese manufacturer won’t rush with the new model and that the 2022 Mazda CX-9 will remain pretty much unchanged.

This means that you may count on a familiar design, which still has a lot of amazing things to offer. Despite that many rivals are younger, this model looks amazing and drives even better. Add to this a potent and efficient engine and it becomes obvious why there’s no need to rush with the next generation. The 2022 Mazda CX-9 will most likely be a typical carryover model, so we expect to see it sometime late in the next year.

In terms of base design characteristics, the 2022 Mazda CX-9 is about to carry on in the same way. This could easily be the last model year of the current generation. So, it’s hard to believe that some more significant updates could come. This particularly refers to mechanics, which are already pretty impressive. This particularly refers to the chassis and suspension setup, which make this crossover by far the most athletic model in the class.

When it comes to styling, we don’t expect more notable changes either. Of course, a couple of new details is always possible. Still, the current model already looks gorgeous, so there is no need to waste ideas on the model that gets pretty close to the end of the production cycle.

Many consider CX-9 the most stylish model in the class and that’s not just because of the exterior design. The cabin looks equally impressive. You may count on spectacular aesthetics, which come in a combination with impressive materials. Practically, this model is on par with many premium mid-size crossovers and doesn’t lack in any aspect.

When it comes to the passenger space, the first two rows are pretty spacious and comfortable. There is plenty of legroom, while the seats are massive and supports. Typically for the segment, the third row feels cramped and adult passengers won’t find much use from it.

The current generation of this gorgeous crossover doesn’t have too many drawbacks. Still, the amount of cargo space is a pretty big one. This model definitely isn’t a perfect family hauler, as it comes with a total cargo volume of 71 cubic feet. That’s less compared to most rivals in the class. 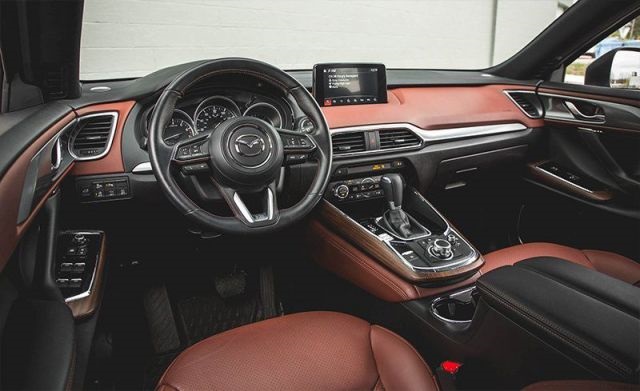 Considering that this will probably be the last model year of the current generation, we doubt that the Japanese manufacturer will offer too many novelties in terms of standard equipment. We expect to see pretty much the same list of standard features, which includes tech goodies like a 10.3-inch touchscreen, Bluetooth, two USB ports, voice recognition, smartphone integration etc. Additionally, you can get goodies like satellite radio, second- and third-row dual USB ports, navigation, and a 12-speaker Bose Centerpoint surround-sound stereo.

When it comes to safety features, the current model comes with a very long list of standard goodies, so we don’t expect any particular additions for the next year. Therefore, count on things like automatic emergency braking with pedestrian detection, blind-spot monitoring with rear cross-traffic alert, stop-and-go adaptive cruise control, lane departure warning, lane keep assist, a rearview camera, a traffic sign recognition system etc. Additionally, you can get parking sensors, adaptive headlights, and a surround-view parking camera etc.

Things under the hood will certainly remain the same. While most rivals come with larger V6 units, this one features a turbo-four. However, it doesn’t lack any power, considering that a familiar 2.5-liter unit features a max output of 227 horses. Things become even better if you use premium gasoline, which increases the max output to 250 horsepower and 330 pound-feet of torque. The power is sent to the front or all wheels through a smooth-shifting 6-speed automatic gearbox.

Driving dynamics are pretty good with this engine and, at the same time, fuel economy is pretty impressive too. You may count on about 22 mpg in the city and 28 pound-feet of torque. Those are some of the highest ratings in the class. 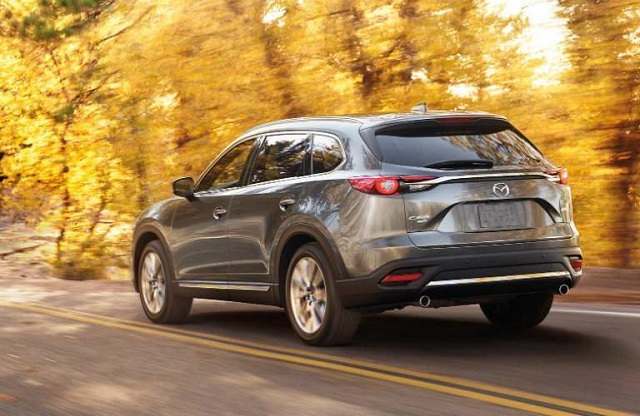 Since there are no bigger changes to come, we presume that the 2022 Mazda CX-9 will hit the market sometime late in the next year. Base models should go around 34.000 dollars. When it comes to the competition, some of the key rivals are models like Toyota Highlander, Kia Telluride, Ford Explorer, Honda Pilot etc.