The segment of three-row SUVs is one of the toughest in the segment and Atlas tries to stand out with its spacious cabin and good maneuverability. It also looks quite fresh, as it was updated less than two years ago. Add to these decent sales numbers and it becomes clear that the German manufacturer won’t rush with changes and that the 2023 VW Atlas will be a typical carryover model. We expect to see a familiar design, while the only changes that could happen are minor tweaks to the list o standard and available equipment.

The next year’s model will continue with familiar pros and cons. This SUV is large and very spacious but at the same time, it is also very maneuverable and easy to drive. Furthermore, we like its intuitive infotainment system. Still, the Atlas isn’t without flaws. It features subpar interior quality, while the engine lineup isn’t particularly impressive either.

As there are no changes to come, we expect that the 2023 VW Atlas will hit the market sometime in the last quarter of the year. 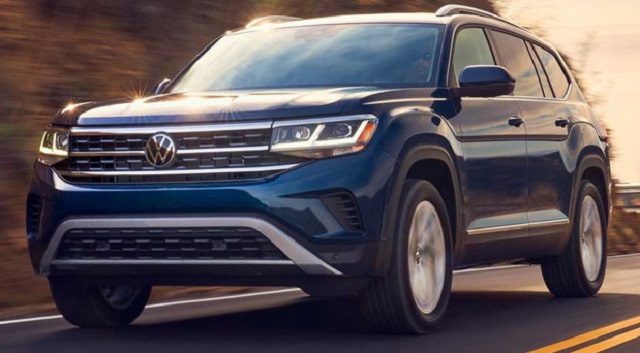 The current generation has been around since 2018 and despite the 2021 update, the overall layout is still the same. This SUV rides on the MQB platform, even though it’s one of the largest vehicles in the entire VW group. Therefore, it features an FWD layout, which is quite typical for the segment. Still, the handling and overall driving experience are on a surprisingly high level for this class of vehicles. The Atlas is maneuverable, easy to drive and surprisingly agile, though still not at the same level as models like Mazda CX-9.

Visually, this SUV was updated in 2021. The new styling brings a more prominent front-end design, which upgraded the grille, headlights and bumper. It looks pretty fresh and appealing, so we have no doubt it will remain in its current form for some more time.

The inside of the 2023 VW Atlas will also continue in the same way, with both good and bad sides. When it comes to things we don’t like, the first thing that comes to mind is the interior quality. Materials are mostly hard plastics, while the build quality isn’t impressive either. 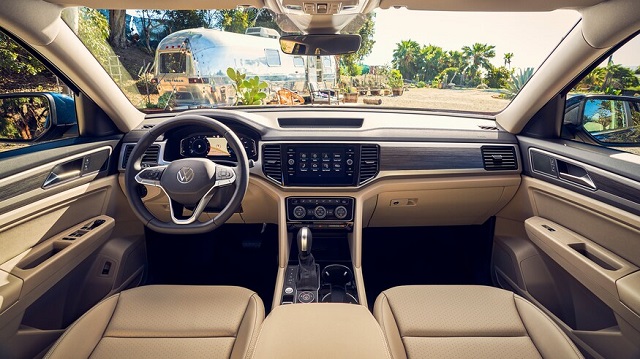 On the other hand, this is one of the biggest models in the class, so it’s no wonder it offers tremendous amounts of space. All three rows are spacious enough to accommodate adults, even the third row. The front seats are well-shaped, though they may feel a little bit too firm for some drivers.

The cargo area also offers some pretty impressive numbers. You may count on about 20.6 cubic feet of cargo space behind its third-row seats, 55.5 cubic feet with these seats folded down, and 96.8 cubic feet of the total cargo volume. Those are some of the highest ratings in the class.

The same thing is with safety features. So, base models should come equipped with goodies like a rearview camera, blind-spot monitoring, rear cross-traffic alert, forward collision warning, pedestrian detection and automatic emergency braking.

This SUV is available with two engines. Base models are equipped with a 2.0-liter turbo-four, which puts out around 235 horsepower and 258 pound-feet of torque. While this amount of power may feel enough for daily commuting, it’s below class standards in terms of performance. Furthermore, the engine doesn’t feel particularly refined. The fuel economy isn’t impressive either, as you can get no more than 21 mpg in the city and 25 mpg on the highway, which is low for a turbo-four engine in this class.

The optional V6 is smoother and more capable. We are talking about the good-old 3.6-liter VR6 engine, which puts out around 276 horsepower and offers notably better performance. However, it is even thirstier, as it returns around 18 mpg in the city and 24 mpg on the highway, which is below average for the segment. 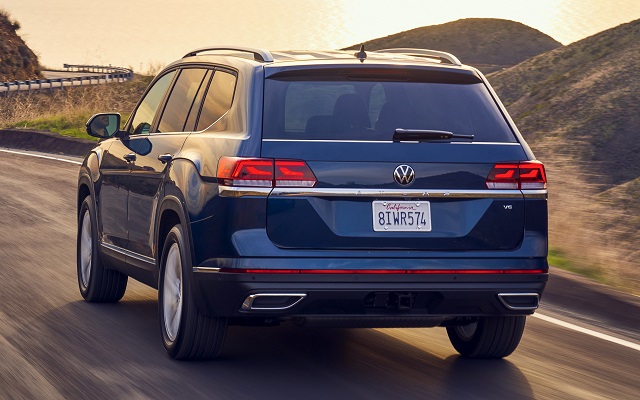 As there are no significant changes to come, we expect that the 2023 VW Atlas will hit the market sometime in the last quarter of the year. Base models should cost around 34.000 dollars.