The new generation of the popular full-size SUV is here and it is expected to hit the market this summer. If we consider that even the outgoing version of the previous generation was a bestseller in the segment, there is no doubt that the 2021 Chevy Tahoe will mark even better numbers. The reasons for such expectations are pretty obvious, as the new model comes with improvements in various aspects.

Speaking of improvements, there is a completely new design, not just in terms of aesthetics, but also in terms of mechanics. With a new platform and loads of new parts, the new model provides far better driving experience and comfort. Also, the new model is bigger, with more space on the inside, and also brings a full load of new tech features. On the other side, things are mostly the same when it comes to the powertrain, though we have to mention that a diesel version will be a big novelty for the next year.

This redesign has brings a full load of novelties. First of all, there is a new platform. Of course, we are talking about a T1 architecture, the same one that underprints the new Silverado. Thanks to the use of lightweight materials, the new model has managed to lose around 300 pounds. Also, a big novelty is an independent rear suspension, which provides superior ride quality. Most importantly, this is a standard feature across the whole lineup.

When it comes to dimension, the new model is notably bigger than the previous generation. First of all, it measures almost 121 inches in wheelbase, while the overall length goes all-away up to 210.7 inches, which makes it the longest model in the class if we exclude long-wheelbase models Expedition Max and Suburban. Also, the new 2021 Chevy Tahoe is wider than any other model in the class.

Of course, the recent redesign has also brought a completely new styling. Obviously, new aesthetics are heavily inspired by the new Silverado. Moreover, the front end is almost identical. On the other side, the rest of the body comes in a typical wagon manner and those long overhangs, especially at the rear end, are something we would expect to see from a big SUV like this.

This is where the 2021 Chevy Tahoe brings significant improvements. The new generation is better in every aspect. First of all, there is far more space on the inside which, to be honest, wasn’t very hard, considering that the previous generation is pretty tight compared to the biggest rival, Ford Expedition. The new model is generous in terms of legroom and even the third row offers more than enough room for comfortable accommodation.

The same thing goes for the cargo area. Moreover, the 2021 Chevy Tahoe features almost 5 cubic feet more than the Expedition when it comes to the cargo space behind the third row. In numbers, that would be more than 25.5 cubic feet. Things aren’t much different in terms of the overall cargo volume. It goes all-away up to  122.9 cubic feet which is more you can get in the Expedition, whether it’s about standard- or long-wheelbase version. 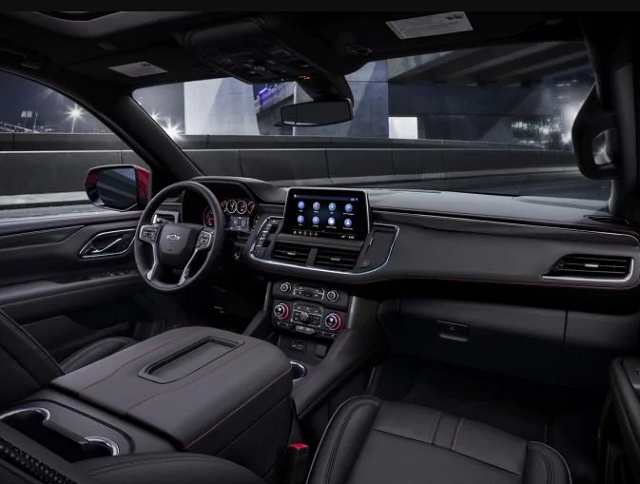 Besides significantly more space, the 2021 Chevy Tahoe also brings a new dashboard design. Unlike Silverado, Tahoe features a new dash, which looks pretty attractive. Chevy has never been famous for spectacular interior quality, but things are actually very good here. Materials are finer, while that large tablet-like touchscreen definitely makes the new model look far more upscale. Another thing we should mention is that the new model will be offered in six trim levels. The previous version was available in just three trim levels.

When it comes to engines, the 2021 Chevy Tahoe will continue with two familiar V8 engines. Base models will carry on with a 5.3-liter engine, with the same output that goes around 355 horsepower and 383 pound-feet of torque. Of course, higher trims will be offered with a bigger 6.2-liter V8 engine, which also comes with unchanged specs. Therefore, you may count on a max output of 420 horsepower and 460 pound-feet of torque, which is still the most powerful engine you can get in the class.

On the other side, a big novelty for the next year is the addition of a diesel engine. Of course, we are talking about a 3.0-liter turbodiesel V6, which is good for about 277 horsepower and 460 pound-feet of torque.

All three engines will come standard with a 10-speed automatic transmission. 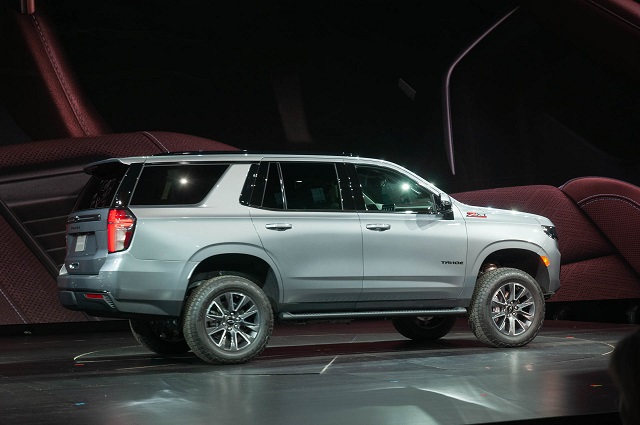 We expect that the 2021 Chevy Tahoe will hit the market this summer. The base version will cost 50.300 dollars, plus the destination fee. On the other side, range-topping models will probably go over 70.000 dollars. Of course, the Ford Expedition will be the biggest rival, while other competitors are models like Nissan Armada, Toyota Sequoia, etc.