The segment of electric vehicles is growing at rapid speed and one of the new names in the business is a company called Rivian. This is a startup company that has recently introduced two models that should start production soon. The first one was a pickup truck R1T, while the 2021 Rivian R1S is next in the line. This will be a full-size luxury SUV, which will come with loads of features, three battery packages etc. It will be capable in many ways, while the company promises spectacular performances and range.

With three battery configurations and a pretty impressive overall dimension, this will be a pretty capable hauler, with three rows of seats, decent payload capacity and respectable cargo volume. The new model shares a lot of parts with the R1T truck, and we expect it will hit the market sometime in the second half of the year.

One of the strongest points of this SUV will be a variety of drivetrain options in the offer. Just like the R1T truck, this one will also come with three battery packages. Base models will be equipped with a 105-kWh battery pack, which should be more than enough to ensure 240 miles on a single charge. This will be the slowest version in the offer, though we can’t say that 0-60 time in 5 seconds sounds slow.

A mid-range battery will be good for 135 kWh. With such a capacity, we may count on 310 miles of max range. However, this will be the most powerful version in the offer with 754 horsepower and 826 pound-feet of torque. That would be enough for a sprint from zero to sixty in less than three seconds. Of course, impressive acceleration won’t be the only great thing about this SUV. This particular configuration will come with four electric motors, one for each wheel. Therefore, it will feature a genuine 4X4 drive, which promises impressive off-road capabilities.

Finally, you may count on a 180-kWh battery pack. Obviously, this version will feature the longest range, which should go all-away up to 410 miles. That should be a class-leading number, and that particular version would be a perfect choice for all those drivers who frequently go on longer trips.

This will be a highly capable SUV, as the latest reports suggest a max towing capacity of 7.700 pounds. That’s an average number for the class, something you may expect from other full-size SUVs with internal-combustion engines. When it comes to max payload capacity, you may count on about 1.800 pounds. 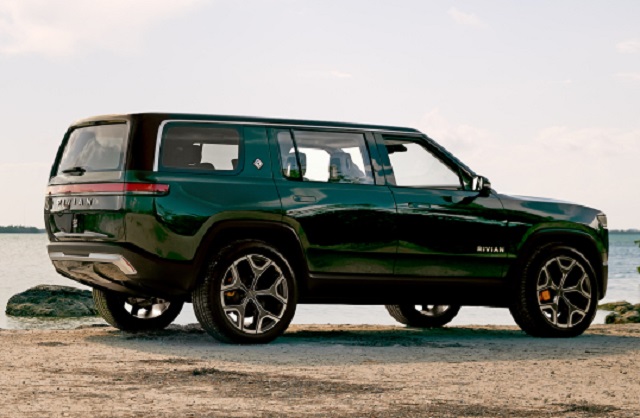 In terms of base design characteristics, the 2021 Rivian R1S won’t be much different than the R1T model. This particularly refers to mechanics, as the two models will ride on the same skateboard platform that packs the battery under the floor. In terms of dimensions, you may count on 121.1 inches in wheelbase and more than 200 inches in overall length, so we are talking about a genuine SUV. Visually, you may count on the same front end as on the R1T, while the rest of the body will be designed in typical SUV manner, with a pretty boxy shape at the rear end, which means you may count on a pretty functional cargo area, which accommodates large objects with ease.

Another thing particularly likes about the 2021 Rivian R1S is the suspension setup. This SUV will feature adjustable suspension, which allows easy adjustments of ground clearance, which goes between 8 and 14.5 inches.

The cabin will be pretty much the same as on the truck sibling, particularly in terms of the dashboard design, which features a modern design, which combines classic lines with loads of advanced tech goodies. This includes a huge center touchscreen that measures full 15.6 inches diagonally. Also, there is a large 12.3-inch digital instrument screen and a flat-bottomed steering wheel that makes everything look sportier.

Thanks to a long wheelbase and the fact that there is no engine at the front, the 2021 Rivian R1S will also feature three very spacious rows of seats. All three rows will be adult-friendly, while we count on expansive cargo area as well. A great thing to know is that you may also count on a nice 11.1 cubic feet of cargo space at the front. 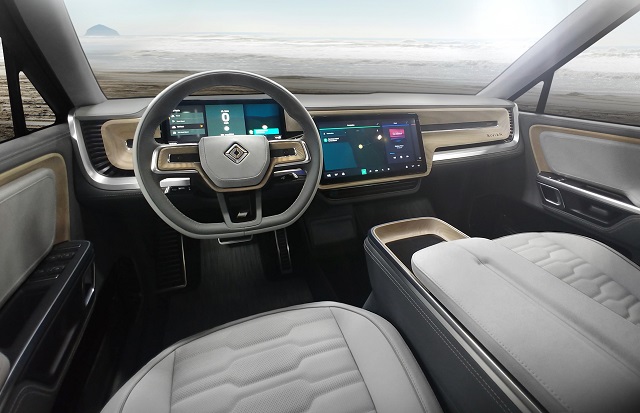 If we can rely on the latest reports, the 2021 Rivian R1S should hit the market by the end of the year. When it comes to the price, base models should go around 74.000 dollars.