Despite that the carmaker is getting more and more global, there is still a fair number of models that are designed for specific markets. The 2021 VW Tarek is one of them. Named after the famous competition car, this small crossover competes primarily in Asia, though we can find it in some other parts of the world as well. These days, we are getting reports about the update, while some sources also suggest the possibility to see it in North America. At this point, that’s just speculation.

What we know is that the new model has a lot of good things to offer. Of course, it all starts with VW’s familiar styling approach, while the AWD system will be available across the whole lineup. The new version is about to arrive later in the year.

When it comes to base design characteristics, this model fills up both Tiguan’s and T-Roc’s spaces in the lineup in countries like China or India. With nearly 106 inches in wheelbase, it is more spacious than most rivals. Still, this crossover has another advantage over the aforementioned models, considering that it features higher ground clearance and bigger approach and departure angles. All these things make it more capable off the road, but the Tarek is also a pretty comfortable vehicle to drive on the road. It rides on a well-known MQB platform and shares most of its parts with models like Seat Ateca and Skoda Karoq, so you may count on a similar driving experience as well.

For the next year, we are about to see some updates and that particularly refers to visual appearance. Still, things will be typically conservative, like in any other VW model, so the number of changes won’t be that big. The focus will be on the front end, which will receive some bits from the company’s latest design language, in order to be aligned with models like the recently updated Tiguan.

On the inside, we don’t expect bigger surprises. The overall cabin layout will remain the same, which means you may count on good overall quality, combined with VW’s typical aesthetics and relatively fine materials. Of course, the cabin benefits from a quite long wheelbase, so the amount of passenger space is actually pretty generous. The cargo area is also pretty generous and offers around 28 cubic feet of cargo space behind the rear seatbacks and 66 cubes with them folded flat. There is also a decent amount of standard and optional equipment, including things like an 8-inch touchscreen, Wi-Fi hotspot, navigation, premium audio system etc. 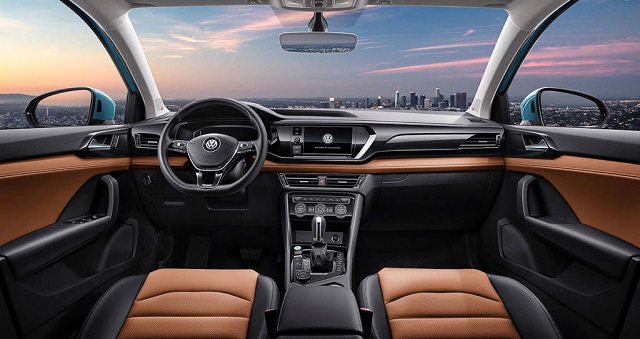 Depending on the part of the world, this crossover comes with different engines in offer. In most markets, the base engine is a 1.4-liter TSI engine, with a max output of around 150 horsepower. On many markets, you can also get a more powerful version, equipped with a 2.0-liter turbo-four engine, which puts out around 190 horsepower.

For the North American market, we expect the same engine as in Jetta. This means a new 1.5-liter turbo-four, which puts out around 158 horsepower and 184 pound-feet of torque.

In China, there is also an all-electric version, good for about 134 horsepower. A single electric motor comes in pair with a 44.1-kWh battery, which ensures a max range of nearly 200 miles on a single charge.