The legendary SUV has been around for decades and the newest iteration arrived just recently, for the 2021 model year. That’s why no one expects bigger changes for the 2022 Chevy Suburban, which will represent the second production year of the current generation. The current model is very fresh and, more importantly, great in all aspects, so there is really no need for early updates. Some sources speculate about the hi-performance SS model, but chances to see such a version are actually minor.

You may count on the same design as in the current model, which came completely redesigned, with improvements in various aspects. The Suburban is spacious, very practical and offers capable powertrain options We also like the long list of standard and available features, while the new generation finally gets the interior quality it deserves. Since there are no significant changes to come, we presume that the 2022 Chevy Suburban will hit the market sometime in the last quarter of the year. 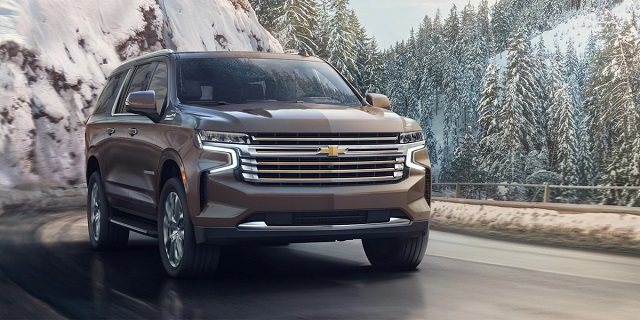 In terms of base design characteristics, changes definitely won’t happen. The 2022 Chevy Suburban is about to carry on with the same design, which is based on the new, T1 platform. The new generation is notably bigger but, more importantly, also significantly lighter than its predecessor, which has a big impact on the overall ride quality. Visually, the front end closely resembles Silverado 1500, while the rest of the body comes in a typical SUV/wagon layout.

As we already mentioned, there are some rumors that suggest the arrival of the hi-performance SS version. The legendary badge could come back, but the officials are still quiet on this matter. If it arrives, we have no doubt it would feature a lot of unique details and features, both in terms of mechanics and aesthetics.

This aspect definitely won’t bring changes, so the 2022 Chevy Suburban will continue with all the improvements that came with the recent redesign. The new cabin looks very attractive and we particularly like the look of the new dashboard, which seems way more mature compared to the previous generation. Materials are fine, while the amount of tech features is pretty big.

All three rows are very generous with space. This means that even the third one is generous and feels adult-friendly. The driver’s seat also offers excellent visibility in all directions, even though we are talking about one of the biggest vehicles in the market. 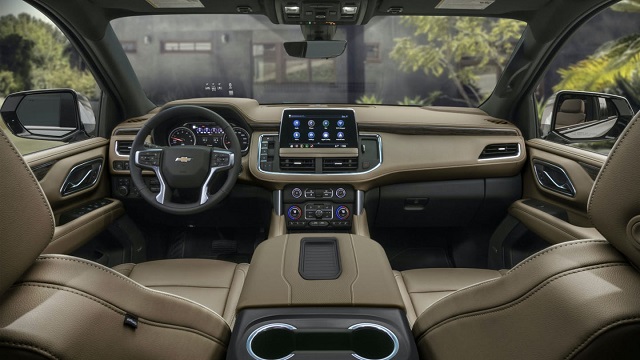 Finally, there is the cargo area, which has brought a significant increase with the recent overhaul. With the new model, you may count on about 41.5 cubic feet of cargo space behind its third-row seats, 93.8 cubic feet with these seats folded, and 144.7 cubic feet with the second and third rows folded, which is a class-leading rating by a pretty big margin.

Of course, there is always a chance to see a couple of new things on the list of standard features, but we are pretty sure that most of the things are about to remain the same. For reference, the current model comes standard with things like keyless entry, remote start, tri-zone automatic climate control, two 120-volt household-style power outlets, and a manual liftgate. Tech goodies like a 10.2-inch touch screen, Apple CarPlay, Android Auto, eight USB ports, Bluetooth, a Wi-Fi hot spot, HD Radio, satellite radio, and six speakers are also on the list of standard equipment.

When it comes to optional features, there are things like a navigation system, nine- and 10-speaker stereos, wireless device charging, a rear-seat entertainment system with two 12.6-inch touch screens, sunroof, a hands-free power liftgate, and power-retractable side steps. 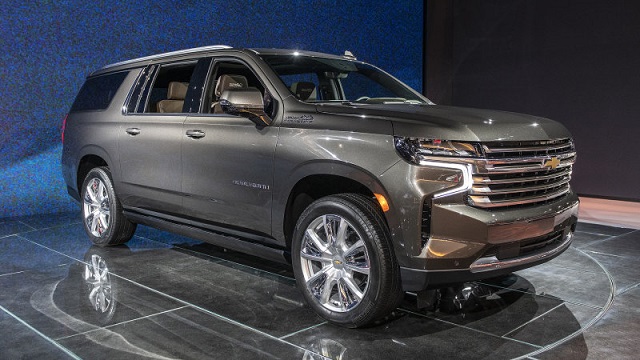 When it comes to the rumored SS model, we presume it would feature an upgraded version of the 6.2-liter engine, most likely the same version as models like Camaro or previous-generation Corvette, with around 455 horsepower.

We expect to see a 2022 Chevy Suburban sometime late in the year, with the starting price of around 53.000 dollars. Key competitors will be models like Ford Expedition MAX, Toyota Sequoia etc.