2022 Honda Passport Could Get Mid-Cycle Update

The Passport came back three years ago after a long hiatus and it instantly gained a reputation as one of the best two-row mid-size crossovers, where some of the key competitors are models like Ford Edge, Hyundai Santa Fe, Nissan Murano etc. The 2022 Honda Passport will represent the fourth production year and while we are still waiting to hear something from the officials, many experts believe that this model year could come with notable changes. Most likely, that would be a mid-cycle update, with the focus on aesthetics, though updates in other aspects are welcome too.

You may count on the same overall layout. What we like about this crossover is a powerful and refined V6 engine and pretty engaging handling for the class. The cabin is also quite roomy, while the overall build quality is pretty high. On the other side, the list of standard features could be longer, while the infotainment system is a little bit complicated to use. So, those would be aspects where we could see improvements. In any case, the 2022 Honda Passport should hit the market sometime in the second half of the year. 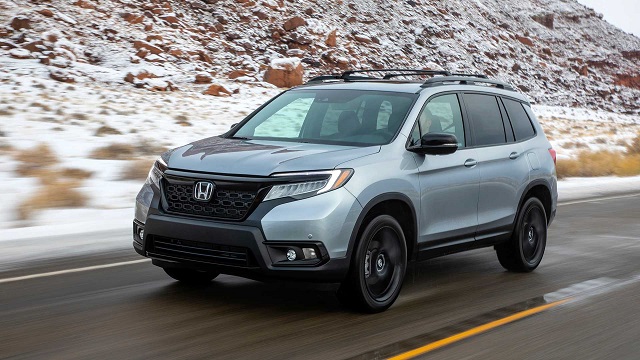 If the Japanese manufacturer is about to bring updates for the 2022 Honda Passport, we have no doubt that the focus would be on aesthetics. This would mean a typical facelift and although the amount of reliable information is still insufficient, we know what to expect from this update. Of course, our reference is the recently-updated Ridgeline, which came with a completely new front end. We presume that the 2022 Honda Passport would come with same changes, which would mean new headlights, grille and bumper, all designed in a much bolder and rugger fashion. The rear could receive some changes too, in terms of new taillights, revised rear bumper etc.

Of course, we would also expect to see updates in terms of new color options, new wheels, while the mechanical aspect of the vehicle should remain pretty much the same.

On the inside, we don’t expect too many changes. The 2022 Honda Passport should carry on with a familiar cabin layout, which offers solid build quality and nice materials. Some rivals may feature fancier dashboard designs, but the quality is on the Passport’s side for sure. For the next year, we would definitely like to see a new infotainment system, considering that the current one isn’t among the most intuitive ones in the segment.

When it comes to the passenger room, both rows are generous with space, while the driving position is excellent. Furthermore, we like the visibility in all directions, as well as the overall ergonomics. The cargo area is also pretty big for the class. You may count on about 50 cubic feet behind the second row and more than 100 cubics of the total volume. That’s more compared to most three-row mid-size crossovers.

Novelties in terms of standard equipment are always welcome, so we expect to see some of them in the 2022 Honda Passport. At this point, it’s still early for details, but we expect it will be notably longer compared to the current model. For reference, the current model comes standard with goodies like tri-zone climate control, push-button start, keyless entry, n 8-inch touch screen, a seven-speaker stereo, Bluetooth, a USB port, and smartphone integration via Apple CarPlay and Android Auto etc.

Of course, we should look for possible additions to the list of standard features on the current list of options. There, you can find things like a moonroof, navigation, a 10-speaker stereo, satellite radio, a Wi-Fi hot spot, two additional USB ports, wireless device charging, and a 115-volt household-style power outlet.

Things under the hood should change, so we expect to see a 2022 Honda Passport with a well-known 3.5-liter V6, which puts out around 280 horsepower and 262 pound-feet of torque. It comes in pair with a 9-speed automatic transmission and the general impression about the whole powertrain system is really good. Everything looks pretty refined, while the fuel economy is also more than decent. You may count on about 20 mpg in the city and 25 mpg on the highway, which is about average for the class.

Besides the high level of refinement, the Passport also offers different traction modes, which can be very helpful if you go off the road. When it comes to utility, this SUV can tow up to 5.000 pounds.

Considering that this facelift seems pretty likely, we presume that the 2022 Honda Passport could arrive a little bit earlier than usual. However, that should still remain within the second half of the year. When it comes to the price, the current model starts at around 33.000 dollars and we don’t expect a bigger increase in the future.