Tesla’s second crossover arrived last year and most reports suggest no bigger changes for the 2022 Tesla Model Y, which will represent the third production year. Even if there are some changes to come, they would come meanwhile, because Tesla doesn’t practice yearly updates, but rather brings novelties constantly. In any case, most of the things will certainly remain the same. This will remain a highly capable crossover, which offers impressive range, solid acceleration and a pretty spacious cabin, all that for a relatively reasonable price.

When it comes to possible novelties, we presume that most of them would come in terms of new interior features. On the other side, we don’t expect changes in terms of performance. This crossover comes in two variants and we doubt it will come up with something bigger in the near future. The 2022 Tesla Model Y is expected to hit the market sometime late in the next year. 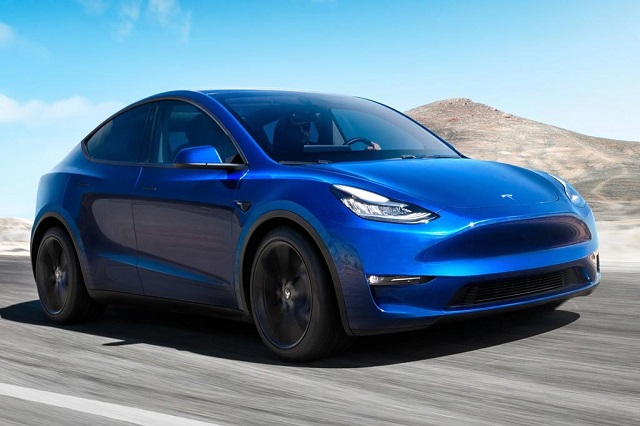 When it comes to base design characteristics, bigger changes definitely won’t happen. This is still a very fresh model, which is based on the well-known Model 3. The tight connection between the two models is noticeable in every way. Visually, things the Model Y looks pretty much like the Model 3 with higher ground clearance. Of course, both models follow Tesla’s contemporary design language and it’s hard to expect any surprises in this aspect. It features a typical sloping roof design, which may look attractive but definitely isn’t very beneficial in terms of interior space.

The two models are also pretty much the same in terms of mechanics. The two models ride on the same platform and use the same tech solutions, though this crossover features a slightly longer wheelbase, for about 0.6 inches. Although classified as a compact crossover, it’s 113.8-inch wheelbase is comparable with most mid-size competitors.

Bigger changes on the inside aren’t expected either. The 2022 Tesla Model Y will carry on with a familiar dashboard design, which looks nearly identical to the Model 3. Everything looks so simplistic, while the highlight spot belongs to the large 15-inch touchscreen, which controls pretty much everything. Some of us may not like the lack of physical controls, but we have to say that the screen works great. It is fast and super-intuitive, while the graphics are impressive. 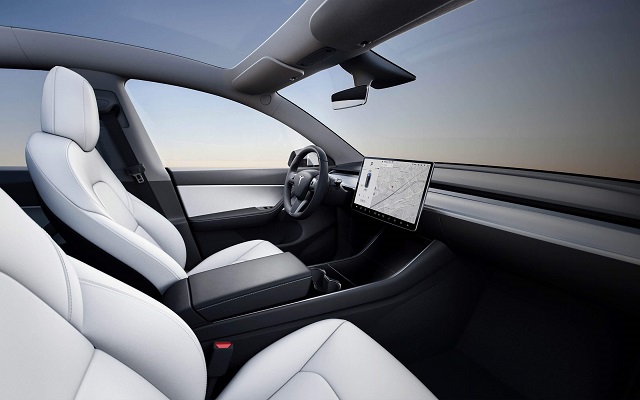 While the upper section of the dashboard looks premium, things aren’t that great in the lower sections. There, you will find a lot of cheap plastics, while the build quality is disappointing. On the other side, you may count on more than generous amounts of legroom. Two rows of seats are standard, while you can pay an extra $3000 for the third row. The cargo area also offers some pretty respectable numbers for the class, as the total cargo area goes up to 68 cubic feet.

This is where novelties are always possible. The current model comes with a lot of standard equipment, including that amazing 15-inch screen. However, it also lacks some essentials, such as Android Auto and Apple CarPlay. The list of standard equipment also includes goodies like navigation, an internet connection and Wi-Fi hot spot, Bluetooth, four USB ports, 14 speakers, HD Radio, wireless device charging, keyless entry, dual-zone automatic climate control, and a panoramic glass roof.

We don’t expect to see bigger changes in this aspect, though we shouldn’t exclude them either. In any case, the two familiar options will remain in the offer. The standard, Long Range model comes with two electric motors and a battery that ensures a max range of 326 miles. This model, although standard, offers some pretty amazing performances, as it needs just 4.5 seconds to hit sixty mph. If you’re looking for something even faster, there is the Performance version, which comes with more power and needs just 3.5 seconds to hit 60 mph. A good thing to know is that this additional performance doesn’t sacrifice performances too much, as the max range goes around 303 miles. This model also comes with lowered suspension, higher top speed and several more upgrades.

We expect to see the 2022 Tesla Model Y sometime late in the next year. The price shouldn’t change too much, so base models should go around 52.000 dollars. Some of the key competitors are models like Jaguar I-Pace, Audi e-tron etc.