Although electric cars are a pretty common thing these days, things weren’t like that just a decade ago. Ten years ago, Nissan was one of the rare EV makers and the only company that had a mass-production model with strong sales numbers. For a decade-long production, the company sold over 600.000 Nissan Leaf models.

However, things have changed in the last couple of years and the Leaf is far from being the best-selling model. Simply, the demand is different and most EV buyers now prefer more expensive and more capable cars. There’s no need to mention that crossovers are the most popular body style by a large margin. So, the Japanese manufacturer decided to come up with a completely new model, which will hit the market soon, as the 2023 Nissan Ariya. 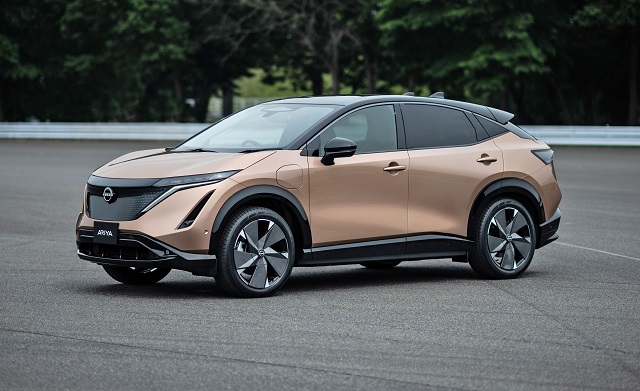 The 2023 Nissan Ariya is a brand-new all-electric car from a Japanese manufacturer. Of course, it comes in a crossover form and it is significantly different than Leaf, particularly in terms of aesthetics. Instead of Leaf’s quite dull styling, this model looks very attractive, thanks to the combination of futuristic lines, sharp front end, sloping roof and other design elements.

In terms of size, this is a typical compact crossover. It is nearly 183 inches long, which is pretty much on par with the RAV4. However, it features a notably longer wheelbase, which makes the car look way more attractive and also brings big benefits on the inside. The car is based on the company’s new CMF-EV platform, developed together with Renault and Mitsubishi.

The new platform allows various configurations regarding electric motors, drivetrain etc. From what we know so far, base models will come with a single electric motor, mounted on the front axle. That motor will feature a max output of 214 horsepower. Another single-motor version will be offered, with 238 horsepower. Finally, count on a dual-motor setup, with a total output of 389 horsepower and Nissan’s intelligent e-4ORCE all-wheel-drive system. 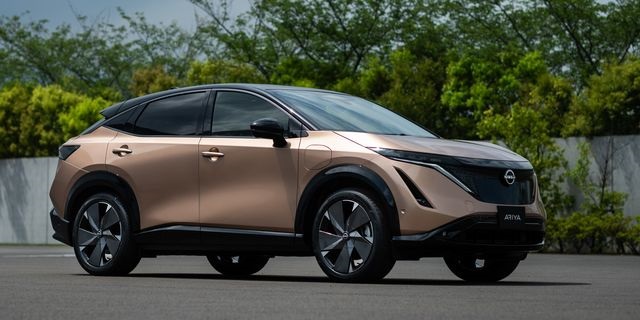 According to the manufacturer, the base single-motor version will be able to hit 60 in less than 8 seconds. The most powerful dual-motor version will need just 4.9 seconds to hit 60 mph. Two battery packs will be offered. Base models will come with a 63-kWh battery pack, while a bigger 87-kWh battery will be offered too. According to t WLTP, the smaller battery will ensure 250 miles of range, while the bigger unit should provide 50 more miles on a single charge. EPA ratings are still unavailable.

Another thing worth mentioning is that the new crossover will feature DC fast-charging at speeds of up to 130 kW. Moreover, the 2023 Nissan Ariya will use the universal CCS plug instead of Leaf’s CHAdeMO unit, which isn’t all that common anymore.

From what we can see, the cabin of the new all-electric crossover will look very elegant. The dashboard looks simplistic and utilizes high-quality materials. It is highlighted by a couple of 12.3-inch screens, which make it look quite premium as well. We also like the center console, which comes with a small and elegant gear shifter, and just a couple of additional buttons. 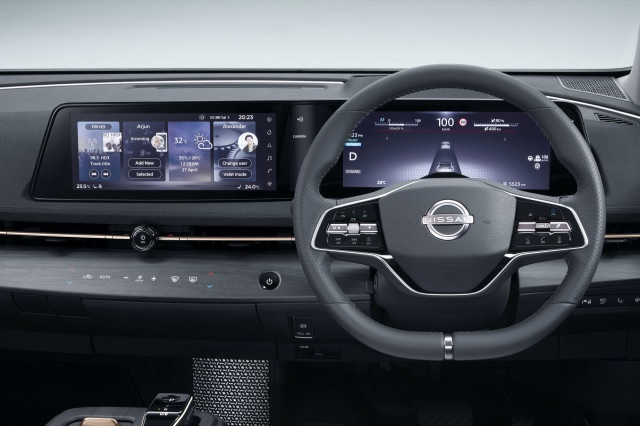 As we’ve just mentioned, this is a typical compact crossover in terms of size but it’s long wheelbase ensures a lot of space on the inside. The front seats are massive and supportive, while the second row also accommodates adults with ease. On the other hand, the sloping roof compromises the cargo area for a bit, so you may count on no more than 23 cubic feet behind the second row.

We believe that the 2023 Nissan Ariya will hit the market in the second half of the year. Base models should go around 40.000 dollars, while the most capable versions with all-wheel drive and the larger battery should be available at around $60.000.