2024 Toyota Sequoia Could Get Gasoline Version!?

Toyota’s full-size SUV has just been redesigned after so many years. Of course, this overhaul has brought all kinds of novelties and improvements, so it’s legal to say that the new generation is way better than the old one. Still, there is still room for improvement and that’s why the latest reports suggest novelties for the 2024 Toyota Sequoia, which will represent the second production year of the generation. Allegedly, the Japanese manufacturer will offer the new twin-turbo V6, along with the currently only option, the hybrid.

The new powertrain wouldn’t bring just a better powertrain choice. It is expected to bring improvements regarding practicality, as there will be no batteries. On the other hand, the overall layout will remain the same and the next year’s Sequoia will continue to deliver mostly the same benefits, starting from the comfortable cabin and ride, handsome styling, efficient hybrid powertrain etc.

We expect that the 2024 Toyota Sequoia will hit the market sometime in the second half of 2023. 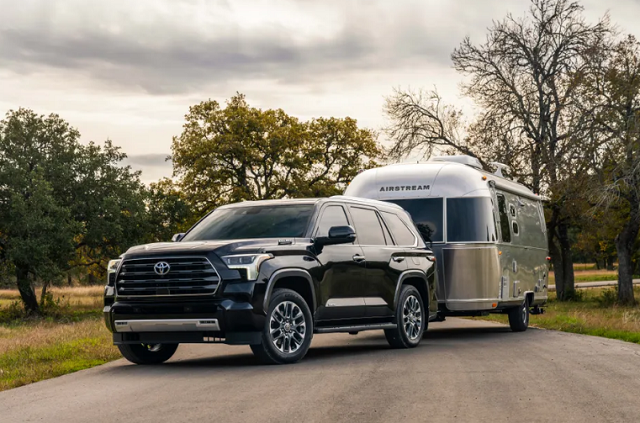 As we are talking about the second production year of the new generation, it’s quite obvious that no bigger changes will occur. The new model rides on the TNGA-F platform, just like Tundra, and offers a pretty smooth and comfortable ride. The Tundra is easy to drive, though we have to say that handling isn’t particularly engaging. Of course, there is the new styling, which won’t change for the second production year.

The overall interior design will also remain the same. This SUV looks really nice from the inside, thanks to the well-designed dashboard, which takes a lot of inspiration from the new Tundra. The overall build quality is really good, while the materials are fine. 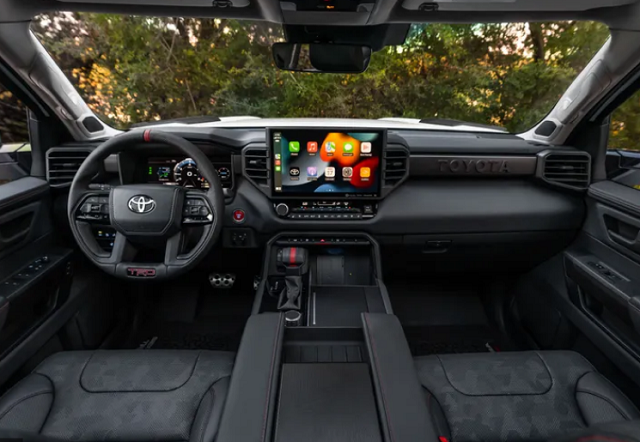 Besides good quality, this SUV also offers a reasonable amount of space. The first two rows are very generous, while the third row is a little bit tighter. Also, the third row doesn’t fold flat, which is one of the biggest complaints about the current-generation Sequoia.

The reason for such flaws is the battery and we presume this will change with the new gasoline version. The lack of batteries will unlock so-needed space, so we expect more headroom in the third row, as well as seats that fold flat into the floor. Of course, this should also provide significantly more cargo space.

Additionally, you can get upgrades like rear sunshades, panoramic sunroof, a 14-inch touch screen, a 14-speaker stereo, wireless device charging and a 120-volt household-style power outlet.

As we’ve just mentioned, the 2024 Toyota Sequoia is expected to get a new powertrain. We are talking about the new 3.4-liter twin-turbo, which would become the new base engine option. This unit already powers the new Tundra, where it puts out around 389 horsepower and 479 pound-feet of torque. It comes coupled with a 10-speed automatic transmission.

On the other hand, the hybrid version will continue in the same way. The system based on a turbocharged V6 engine offers a total output of 437 horsepower and 583 pound-feet of torque. That’s plenty enough for strong acceleration and overall performance, while you may also count on the max towing capacity that goes over 9.500 pounds, which is more than you can tow with rivals like Ford Expedition and Chevy Tahoe. Practically, the new Jeep Wagoneer is the only SUV that offers a higher max towing capacity (10.000 pounds).

We expect that the 2024 Toyota Sequoia will hit the market sometime in the second half of 2023. The new powertrain option should make base versions more affordable. While the current hybrid-powered model starts slightly under $60.000, the gasoline version should cost under 55.000 dollars.