2024 Cadillac Escalade Facelift: What to Expect

The current generation of the famous luxury SUV was launched for the 2021 model year and it is still a pretty fresh model on the market. However, it looks like GM wants to keep it a class leader, so constant updates are coming on. The 2023 model has just been presented with the new high-performance version that features a supercharged V8 engine. Big things are coming with the 2024 Cadillac Escalade as well. This time, we are about to see a mid-cycle refresh. The test mule has already been spotted and it looks like the company prepares a couple of interesting things.

From what we know so far, the focus will be on aesthetics. The 2024 Cadillac Escalade is about to get a couple of aesthetical changes, which should make it look even more appealing. On the other hand, we don’t expect to see bigger interior changes, even though there’s always a chance to see new standard features. Finally, the powertrain lineup should carry over in the same way.

As we’ve just mentioned, the 2024 Cadillac Escalade is about to receive a mid-cycle refresh. We expect to see a typical facelift, mainly with exterior changes. The test mule has already been on the road for a while and it wears a decent portion of camouflage. Of course, most changes will come to the front end, where we expect to see revisions to headlights, grille and similar parts. The rear end might also come with a couple of modifications, while we also count on typical updates like new wheels and color options.

On the other hand, we don’t expect to see any mechanical changes. The 2024 Cadillac Escalade will continue in the same way, with the same chassis setup and the same independent rear suspension. This SUV is smooth and comfortable, though isn’t as engaging to drive as unibody rivals, such as Mercedes-Benz GLS or BMW X7. On the other hand, the Escalade is far superior in things like towing capacity, which goes all away up to 8.200 pounds.

Unlike the exterior, the interior should come without bigger changes. We count on no changes on the dashboard, which already looks really impressive, not just because of those three screens, but also because of the excellent build quality and super-fine materials. Still, we won’t exclude the possibility to see minor changes, such as new color schemes or materials. 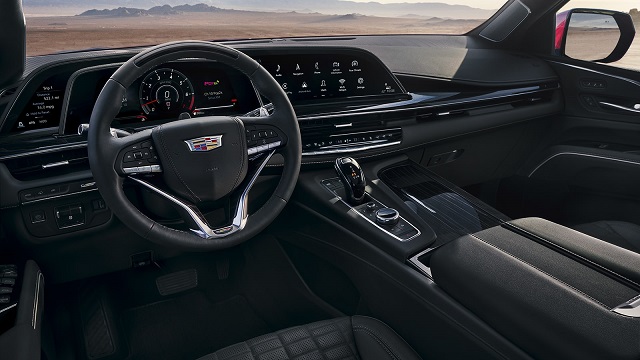 As the overall layout is about to remain unchanged, you may also count on the same amount of passenger space. This SUV accommodated up to eight passengers and all three rows are spacious enough to accommodate adults with ease. Moreover, you may also count on the largest cargo area in the class, which goes around 25.5 cubic feet of space behind the third row, 72.9 cubic feet with the third-row seats folded down, and 121 cubic feet in total.

As we’ve just mentioned, there is a big chance to see some changes regarding the new standard and available equipment. Still, we don’t expect significant upgrades, as the current model is already pretty impressive in this aspect. It comes standard with goodies like a 7.2-inch digital control panel, a 14.2-inch digital gauge cluster, a 16.9-inch touch screen, navigation, a 19-speaker AKG Studio stereo, HD Radio, satellite radio, USB ports, Bluetooth, a Wi-Fi hot spot, wireless device charging, wireless Android Auto and Apple CarPlay and many more.

We presume that some of the current options could appear on the list of standard equipment. For reference, the current model is available with a 36-speaker AKG Studio Reference stereo, a rear-seat entertainment system with two 12.6-inch touch screens, a panoramic sunroof and a center-console refrigerator.

As we’ve just mentioned, things under the hood won’t change. So, standard models will continue with a 6.2-liter V8 gasoline engine, which puts out around 420 horsepower and 460 pound-feet of torque. Also, there is a 3.0-liter inline-six turbodiesel, which puts out 277 horsepower and 460 pound-feet of torque. Although notably slower, the oil burner offers impressive fuel economy, which goes around 20 mpg in the city and 26 mpg on the highway. That is something you can’t get from any other full-size SUV, including direct rivals, such as Lincoln Navigator and Jeep Grand Wagoneer.

Finally, there is the recently introduced Escalade-V, which will continue with a supercharged V8 that puts out around 682 horsepower. With all that power, the Escalade-V needs just 4.3 seconds to hit 60 mph.

All engines come coupled with a 10-speed automatic transmission. 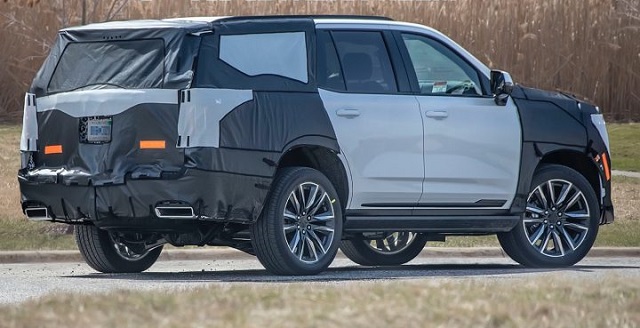 We expect to see the 2024 Cadillac Escalade sometime in the second half of 2023. The starting price should go around 78.000 dollars.