The current generation of the legendary SUV has been around since 2018 and if we can trust the latest reports, the 2023 Jeep Wrangler won’t feature any bigger changes. We are about to see a familiar design, with minor updates only, such as new features and color options. This makes perfect sense, especially if consider all the novelties that were introduced for the 2021 model year, when we saw a Wrangler with a V8 engine for the first time, as well as a plug-in hybrid model.

As there are no significant changes to come, the 2023 Jeep Wrangler will continue to deliver familiar characteristics. This SUV offers excellent off-road performance, as well as a wide engine lineup. Furthermore, the four-door model offers a pretty spacious cabin, while the infotainment system is one of the most intuitive in the class. On the other hand, the main complaint goes to the on-road ride quality and subpar fuel economy.

We expect the next year’s model will hit the market sometime in the last quarter of the year.

Design-wise, the 2023 Jeep Wrangler definitely won’t change. We count on a familiar design, which has been around since 2018. The next year’s model will continue with the familiar layout, which means that we may count on two familiar body styles – a smaller two-door model, as well as on a long-wheelbase four-door version. In both cases, the styling and mechanics should remain pretty much the same.

This SUV is all about off-road performance. So, it’s no wonder that even the most basic versions come with things like four-wheel drive, skid plates, a two-speed transfer case. Additionally, models like Rubicon offer even more off-road upgrades, such as rock rails, locking front and rear differentials, a sway bar, and an upgraded transfer case and a 4WD system.

The same thing goes for interior design. We expect to see a familiar cabin layout, which combines attractive design with an overall solid feel in such a nice fashion. The dashboard looks attractive and even utilizes some pretty nice materials and color schemes. At the same time, the build quality is great and everything seems rock-solid. Furthermore, there is a long list of standard and available tech features, which makes this cabin look even more attractive.

As we already mentioned, the 2023 Jeep Wrangler will continue in two familiar body styles. Base models will continue with the famous two-door layout and in that case, you shouldn’t count on too much passenger room in the second row and cargo space. Things are much better in the four-door version, where adult passengers can accommodate in the second row with ease, while the cargo area offers around 31.7 cubic feet behind the rear seats and 72.4 cubic feet of the total cargo volume, which are quite respectable numbers for the class.

Once again, it’s hard to believe that the 2023 Wrangler is about to bring bigger changes. Most of the things should remain the same as in the current model. That means that based versions would come with manual windows and door locks, push-button start, a removable soft top with sunroof, and three 12-volt outlets, as well as with a 5-inch touchscreen, 8-speaker sound system, Bluetooth etc. Additionally, there is a long list of options, which should include 7- and 8.4-inch touch screens, a nine-speaker Alpine audio system, satellite radio, HD Radio, Apple CarPlay, Android Auto,  Wi-Fi hotspot, a removable hardtop, a power-folding soft top, a forward-facing off-road camera, power windows and locks, air conditioning, dual-zone automatic climate control, keyless entry, and remote start.

Things under the hood won’t change and the 2023 Jeep Wrangler will come with five familiar powertrain options. The offer will start with a 3.6-liter V6, which puts out around 285 horsepower and 260 pound-feet of torque. This is also the only engine that’s available with manual transmission. The rest of the lineup comes with an 8-speed automatic only.

The last year’s model brought two more powertrain options. The first one is a 6.4-liter V8, reserved for the Rubicon 392 version, which puts out 475 horsepower. Also, there is the Wrangler 4xe, which features a plug-in hybrid powertrain, based on a turbo-four engine, with a max output of 375 horsepower.

Some sources also speculate about the possibility to see an all-electric Wrangler in the near future but that’s just a rumor for now. 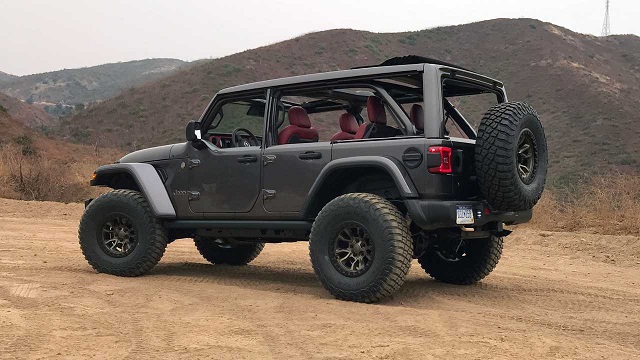 We expect that the 2023 Jeep Wrangler will hit the market in the last quarter of 2022. Two-door models should go around 30.000 dollars, while the four-door version should come with a starting price of around 33.000 dollars. Of course, Ford Bronco and Toyota 4Runner will remain key competitors.