The updated GMC Terrain is finally here, almost. Although the initial plan was to refresh this compact crossover for the 2021 model year, the current Coronavirus outbreak caused delays in many things, including this one. So, the launch of refreshed version was moved for this year and it looks like the new model is about to hit showrooms this summer. Of course, it will come as the 2022 GMC Terrain and it will bring a lot of interesting novelties.

Of course, this refresh is mostly about styling. Both ends of the crossover have been revised and the new model now looks more attractive than before. We will also see significant updates and upgrades in terms of features, both when it comes to safety and tech goodies. Also, there are some brand-new versions to come, including the off-road-oriented AT4 model. We expect that the 2022 GMC Terrain will hit the market this summer.

When it comes to base design characteristics, the 2022 GMC Terrain remained pretty much the same. That was pretty much expected, considering that this was just a mid-cycle update. While the mechanics are pretty much the same, the visual aspect of the SUV has brought a lot of interesting novelties. Of course, the biggest changes are at the front, where you can notice a lot of new details, starting from new headlights and grille, as well as the revised bumper.

The rear fascia has been updated as well and the overall impression is that the new model looks more rugged than before. It features a bolder appearance and borrows many design solutions from bigger counterparts, such as Sierra and Yukon. Of course, the range-topping Denali trim continues with a bunch of exclusive details, such as a different grille, wheels and a full load of chrome details.

On the other side, the interior of the 2022 GMC Terrain won’t bring that many changes. The dashboard design remains the same, which isn’t that bad at all. The current design looks pretty decent, while the build quality is good as well. Of course, we count on some new color schemes in the offer and similar things. 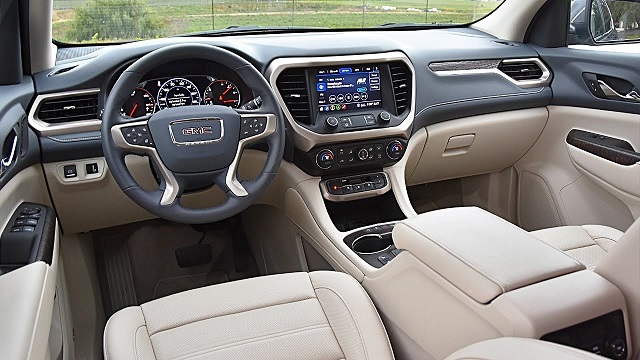 What’s more important is the number of new features. For example, wireless Android Auto and Apple CarPlay are now standard across the range. A head-up display is available in higher trims and standard in Denali. Also, you may count on a significant upgrade in terms of safety, as the list of standard features will include goodies like automatic emergency braking, lane keeping assist, forward collision alert, front pedestrian braking, following distance indicator, and auto high beams.

The rest of the cabin remains the same, which means you may count on a pretty generous amount of passenger space in both rows. On the other side, the cargo area isn’t that impressive.

This refresh will bring updates to standard models but also some brand-new versions, such as the AT4. This trim is now available in pretty much all GMC vehicles in the offer and it’s the most off-road capable variant you can get. In the case of Terrain, the number of upgrades isn’t that big. Moreover, a skid plate is the only thing that separates it from the rest of the models. On the other side, you may count on a full load of exclusive styling details, such as blacked grill, upgraded bumper, red tow hooks, exclusive wheels etc.

Another interesting version we should mention is the Elevation Edition. This package is available in SLE and SLT trim levels and brings additional styling upgrades, such as different wheels and few more exclusive touches.

When it comes to the powertrain, it’s still unclear whether the larger turbo-four will be returning or not. Allegedly, we would see a new version of the engine, which is good for about 237 horsepower and which provides better fuel economy than before.

On the other side, the base 1.5-liter turbo-four will carry on in the same way. This engine puts out around 170 horsepower and delivers quite decent dynamics, especially for daily commuting. It comes in pair with a 9-speed automatic transmission, which works well but can hesitate with shifts on certain occasions. When it comes to fuel economy, you may count on about 25 mpg in the city and 30 mpg on the highway, which is typical for the class. 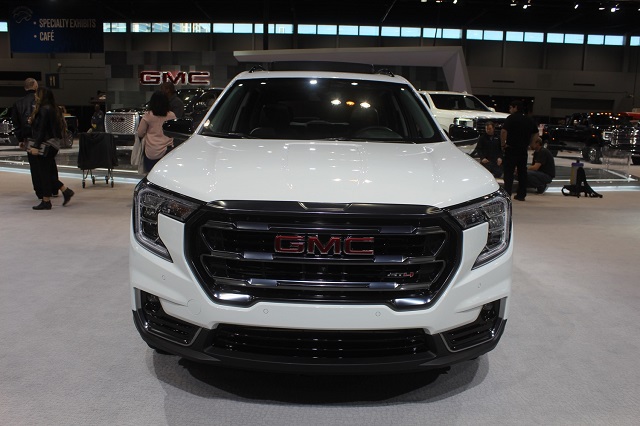 As we already mentioned, we expect that the 2022 GMC Terrain will hit the market in the summer, with a starting price of around 25.000 dollars. The new model will have an extremely hard competition, considering that we are talking about one of the toughest segments on the market, which includes models like Honda CR-V, Mazda CX-5, Toyota RAV4 etc.